WOW - We now have wall and roof framing !!  During week eight, all wall framing, both interior and exterior was erected, with roof trusses going into place at the end of the week. 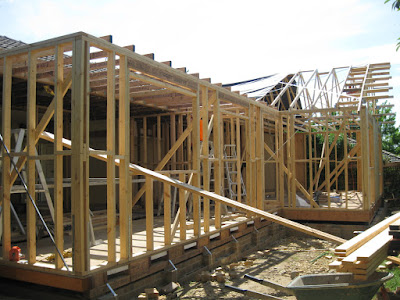 With framing now completed, it is getting easier to see what the finished product will look like.  For those who haven’t seen the plans, the two new bedrooms (to the right hand side of shot) will be recycled cream bricks with a tiled roof, which is intended to respond to the existing look and materiality of the existing house.  Here we have re-used some of the old windows from parts of the house that have been demolished.  On the left hand side of the picture, will be the new kitchen, dining and laundry.  This part of the house is to be spotted gum vertical timber cladding, which will run vertically on the external walls and then wrap horizontally across the new deck (not constructed yet).  This will form the outside entertaining area.  This part of the house will also have a sheet metal roof and will clearly appear as an extension, signalling a new era for the life of the house.
People often have mixed opinion on whether an extension should be made to look as if it was always part of the original house, or whether it should clearly scream “I am new !!”.  My personal opinion is that it depends on the house; the age of the house, the architectural style, how intact the house is to begin with, whether the existing and proposed parts of the house are seen together and also the client’s taste in architecture.  Sometimes, it is nearly impossible to exactly match the colours, materials and features of a house, and to be honest, sometimes you wouldn’t want to. 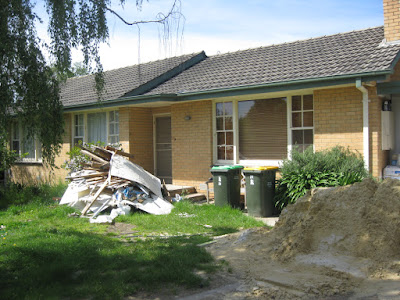 With the Will Street project, we have taken a bit of an each way bet.  Firstly, you can’t see any of the new extension from the front of the house.  For this reason, we have decided to leave the front façade of the house completely original.  Built in the late 1950’s, this house was never going to win any architectural prizes, but for me, that is no reason to carve up a perfectly good example of affordable residential housing, which at some stage would have been someone’s pride and joy.  It is well proportioned and still remains an attractive house to this day.
For part of the extension, we have continued some of the architectural styling from the era, without replicating it exactly.  We have retained original proportioning and material, without trying to make it an exact match.  This part of the extension is saying, “the old house has still got plenty of life in it – celebrate the work our predecessors did, and give it new life”.  The other section of the extension is designed to be a totally new and different style.  Here, it was difficult to extend the existing roof line outwards, without completely changing the look of the rest of the house, so it really gave us the green light to create a new era for the house.  This part of the extension should read almost as a new square to an old patchwork quilt, where the old quilt was too small, or got a hole in it.  It says “the old house is great, but just needs repairs and to be a bit bigger”.
Anyway - what was the alternative ?  To pull the old girl down and put up something new ?  Well, yes, we could have done that, but sometimes there is merit in reusing, recycling and taking something that has performed so well for so long and respecting it enough to give it life well and truly into the 21th Century.  Sometimes, it just isn’t feasible to keep the original.  I believe that these decisions should be made on a case by case basis.
So for this project, the work continues with gusto.  Next week, the recycled windows go in, and the roof tiles and roof sheeting also goes on.  Brickwork will start to go up in two weeks’ time.  The idea is to make it to “lock up” around two weeks before Christmas.
So far, Fred and the boys on site, are running perfectly to schedule - even though there have been the odd few delays (like the asbestos) to date.  Here’s hoping for good weather !!
Stay tuned ….
Posted by Rachel McGlashan at 17:43 No comments: Links to this post

Will Street - Weeks Six and Seven

Demolition complete …… and the clients get their hands dirty !


With the asbestos now gone, things at the Will Street project could get moving once again. 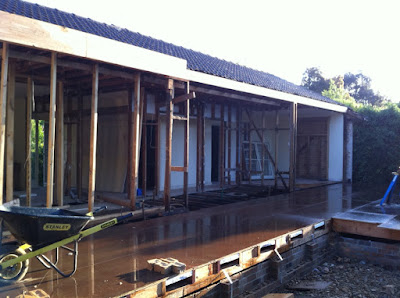 The events that occurred during the sixth week of construction had been eagerly anticipated since the start of the work, for two main reasons.  Firstly because the demolition of the back wall of the house (which was always scheduled to be the last thing to go for both security and weatherproofing reasons) signalled the last of the demolition work and the beginning of the new wall framing meeting the old, and secondly because the clients had elected to save some money and clean off the bricks which were removed from the wall, themselves; stacking them ready for re-use in the extension. 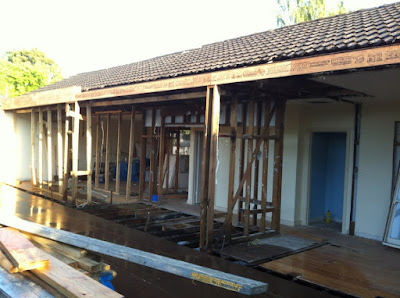 I must say that seeing the whole wall come out is pretty exciting, as now the new wall and roof framing can be located into position and things will really take shape very quickly.  But, back to the bricks …. 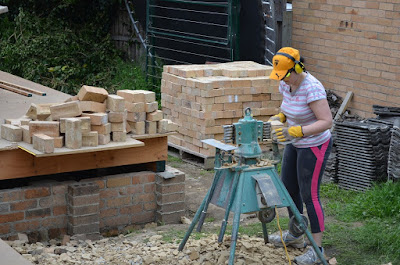 So once the bricks were out, Lyndell and Andrew hired a brick cleaning machine (an awful lot better than chiselling mortar off the bricks by hand) and spent some quality time on the weekend together cleaning bricks ! Seven hundred or so of them to be precise !  Not very romantic, but cleaning their own bricks and re-using them not only saved them hundreds of dollars in buying new bricks, but has also saved them on tipping fees.
In fact re-using materials when renovating is not only a great way to not only blend old with new, but helps to keep building waste out of landfill.  So when doing an extension, think of all the ways that fixtures, fittings and materials can be reused or sold rather than just throwing them away.
Many people choose to buy secondhand kitchen and bathroom joinery, doors, sanitary fixtures and appliances  when renovating– just check out the all the secondhand building materials listed on ebay - http://www.ebay.com.au/sch/Building-Materials-DIY-/3187/i.html?rt=nc&LH_ItemCondition=3000&_dmpt=AU_Building_Materials&_fln=1&_ssov=1&_trksid=p3286.c0.m282
This week, week seven , wall framing is now going into place with roof trusses to arrive on site at the end of the week for installation during week eight.
The installation of the kitchen has now been locked in for the week of the 19th December – so hopefully by then, we will have a ‘kitchen like space’ for the kitchen to be installed into.

Stay tuned for the next existing post – and thanks for reading so far !
Posted by Rachel McGlashan at 00:24 No comments: Links to this post

The good, the bad and the ugly ….
OK, so in my last post, I mentioned that the stump holes were dug ….. not so much because I’d seen they were there, but because I was kind of hoping that even though they were missing, that maybe they would somehow get dug between now and my next site visit.  Secretly though, I was wondering why they hadn’t been dug already. 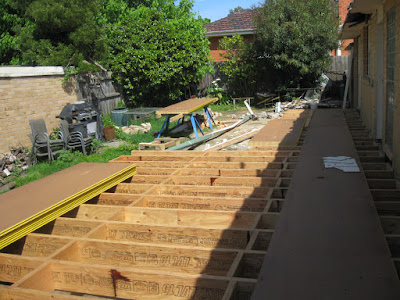 So when I went out to do my next inspection on Friday, here’s what I found !!  No stumps !  But we do have subfloor framing.  Why ? do I hear you asking ?  Well, the builders have elected to span the new floor using LVL (Laminated Veneer Lumbar) for a number of reasons.  Firstly, they had found some old sewer pipes when digging the strip footings and wondered what else might be sitting under the ground that they weren’t expecting.  Secondly, it was pretty muddy and mucky and thirdly, because there are steps and concrete slabs all over the place at the back of the house which they would have to either span or try to dig out or push through, so really spanning over it all makes a lot of sense.  For my mind, this is a great example of innovative building techniques that respond to on site issues and a very proactive decision on behalf of the builders, rather than a “what should we do” phone call to the architect ! 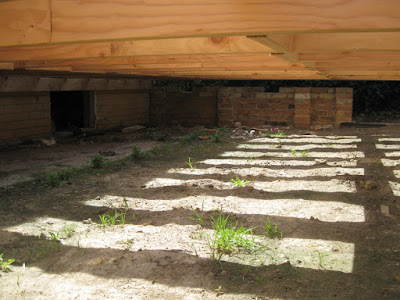 So that was the good.  Here comes the bad and the ugly ….
All was going along swimmingly, and with the sub floor framing installed, demolition of the back wall of the house could now commence. 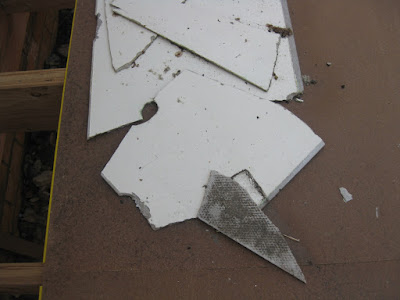 Beading was carefully removed from around windows in readiness for their removal, and the existing guttering and fascia were also removed to enable the eaves to come off.  OK, here is the bad part …. It wasn’t entirely unexpected, but when the first part of the eaves living was removed it looked suspiciously like asbestos !  There was not much that could be done except to bring in the professionals to firstly identify the suspect material and secondly remove it safely. 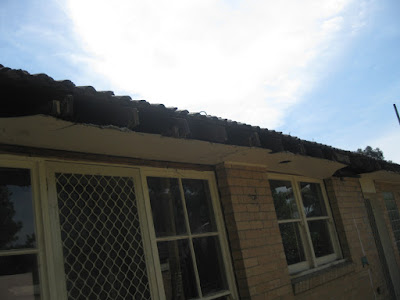 So now the site is officially shut down until we can get the Asbestos Removal crew in to remove the eaves lining.  We are hoping that this will happen at the end of this week, assuming that the material is asbestos.  This will also be an additional cost to the Builder’s Contract price.  This will mark the first variation to the Contract price, but as mentioned previously, not one that completely surprises us.  Houses built in the 1950’s often used asbestos sheeting in eaves linings and according to Wikipedia, Asbestos was used in building in Australia between 1945 and 1980, so the odds were definitely stacked against us. 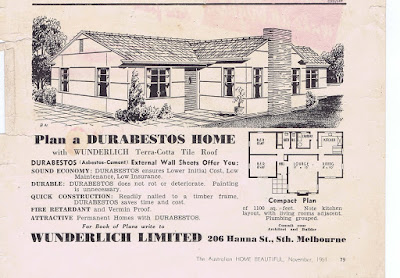 And the ugly ??  Well that has been the look on the client’s face for the two weeks since the stop work was called on site !!  (ha ha, only joking guys !) No, actually the clients have remained surprisingly buoyant while we've been waiting, which has continued to make this project a real pleasure to work on.
Once we have the asbestos cleared up, demolition of the back wall of the house will continue, with wall framing to start shortly after.  Stay tuned !
Posted by Rachel McGlashan at 23:45 No comments: Links to this post